The YellowSquare Hostel complex is located in the Porta Romana area of ​​Milan.

The structure consists of two buildings with a central courtyard joined together through the basement which takes the full surface of the lot and a walkway that connects the buildings on the first floor. The building built as a religious holiday home in 1960 already had a structure with bedrooms with bathrooms. The facade is set back thus creating terraces that give the rooms on the first floor a private terrace.

The basement runs under both buildings and the courtyard. It has a height of 4.5 meters which gives the space brightness and plenty of air. Below the courtyard there is the reinforced concrete chapel facing the octagonal shape. There is also a marble flooring that gives the space elegance and a typical Milanese flavor.

The building facing the street and the building on the back are developed respectively for 6 and 2 floors above ground with reinforced concrete structure. The floors already have a distribution to private rooms with bathroom, with tiled floors and the top floor with a vaulted ceiling also enjoys a view of the swimming pool of the mysterious bathrooms. The building behind the courtyard, on the other hand, has an interesting space with skylights on the other, always completely with tiled floors.

The event space, former conference room will be equipped with sound-absorbing coverings and a lighting and audio system that allow its use for multiple functions such as concerts, presentations, Yoga lessons, photo studio or fashion show room.

The chapel, both for its perfect soundproofing and for its shape, will be used as a club. Furthermore, during the numerous events that take place in Milan, it can also be used for exhibitions or performances.

This area has been equipped with steps that allow customers to have a space to relax where a room called an aquarium has also been created where films can be shown.

The entrance tunnel was conceived as a game of perspectives through the use of colored iron elements that will accompany the traveler in the various spaces of the structure. A large window is also created which opens the cafeteria on the tunnel.

The reception located on the mezzanine floor is invaded by colored reticular elements to create more welcoming spaces. In the cafeteria there will also be the kitchen with a culinary offer that mixes various world cuisines with an Italian base.

The courtyard which is in direct connection with the cafeteria and the entrance tunnel, is also enriched by reticular elements, but here they will be attacked by vegetation which will make the space much more welcoming and warm. 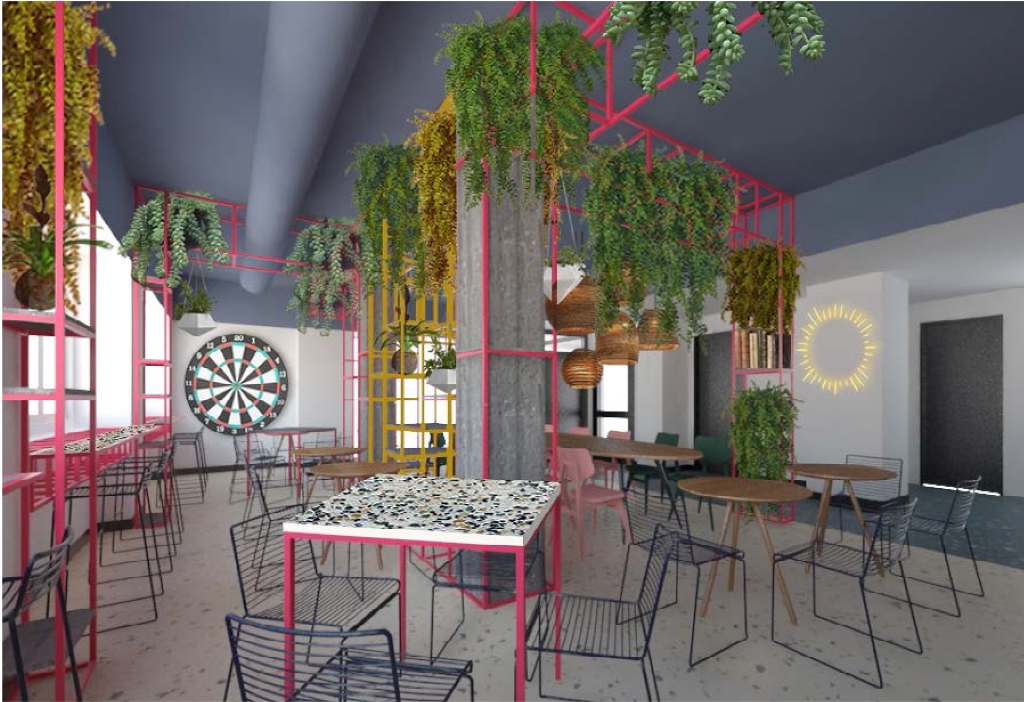