The project masterplan is located in San Giovanni in Persiceto.

The masterplan foresees a substantial modification of the “forma urbis” of the new urban sector. The current Detailed Plan outlines a radiocentric “city”, with a driveway for external delimitation and an arrangement of the volumes according to an “urban block” design irregularly designed around a pedestrianized centrality; public green areas are provided on the edge of the settlement.
The traces of external borders have been kept unchanged. Within this portion of the territory traces of centurial planning are evident. Within this area, secondary, primary roadways and internal canalizations oriented according to orthogonal axes are still clearly identified.
The two main axes, already oriented according to the historical track, are maintained from the current implementation planning. From this analysis naturally arises a grid of decomposition of the territory that generates an urban design recognizable and respectful of the pre-existences and at the same time able to support the development of the works according to functionally autonomous lots.
The completion of the northern ring road constitutes the main road network, connecting the new roundabout on via di Cento with the road network east of San Giovanni and in particular with the railway underpass.
Orthogonally, the main road axis of the sector, which represents the bearing nerve of the entire settlement designed as an “equipped urban park avenue”, is grafted into the ring road. The driveway on which the public car parks overlook is organized on a strip of total width at 60 meters. On the sides there are tree-lined strips and pedestrian avenues. On one side of the park is the cycle path to which the tracks that cross the various residential lots converge.
At the south-west limit of the sector there is the pole of public equipment, placed in continuity with the second level school pole of the city which is represented by all the areas transferred to the community for the construction of equipment of public interest. At the request of the Administration, an extension of the school complex is planned to accommodate a primary and secondary school complex.

Adjacent to the ring road roundabout, there is a new sports center equipped with gyms and fields to integrate the school center and to expand the offer of recreational services in the city. In front of the sports center there will be a space used as a neighborhood civic center.
As per the plan in force on the east side, the main commercial center is located which will be organized into three independent pavilion commercial containers with three different accesses for users and goods with public and appurtenant tree-lined parking lots.
There are three different building designs with increasing population density:
– Residential comb areas with single and two-storey detached houses
– Residential areas with buildings distributed in the green neighborhood organized on 3-4 levels
– Residential areas configured as a courtyard with 5-6 storey buildings arranged in a row around green neighborhood and public spaces

Inside the lot there are public parking spaces on the ground level and the pertinent parking spaces, partly on the floor and partly in the basement. 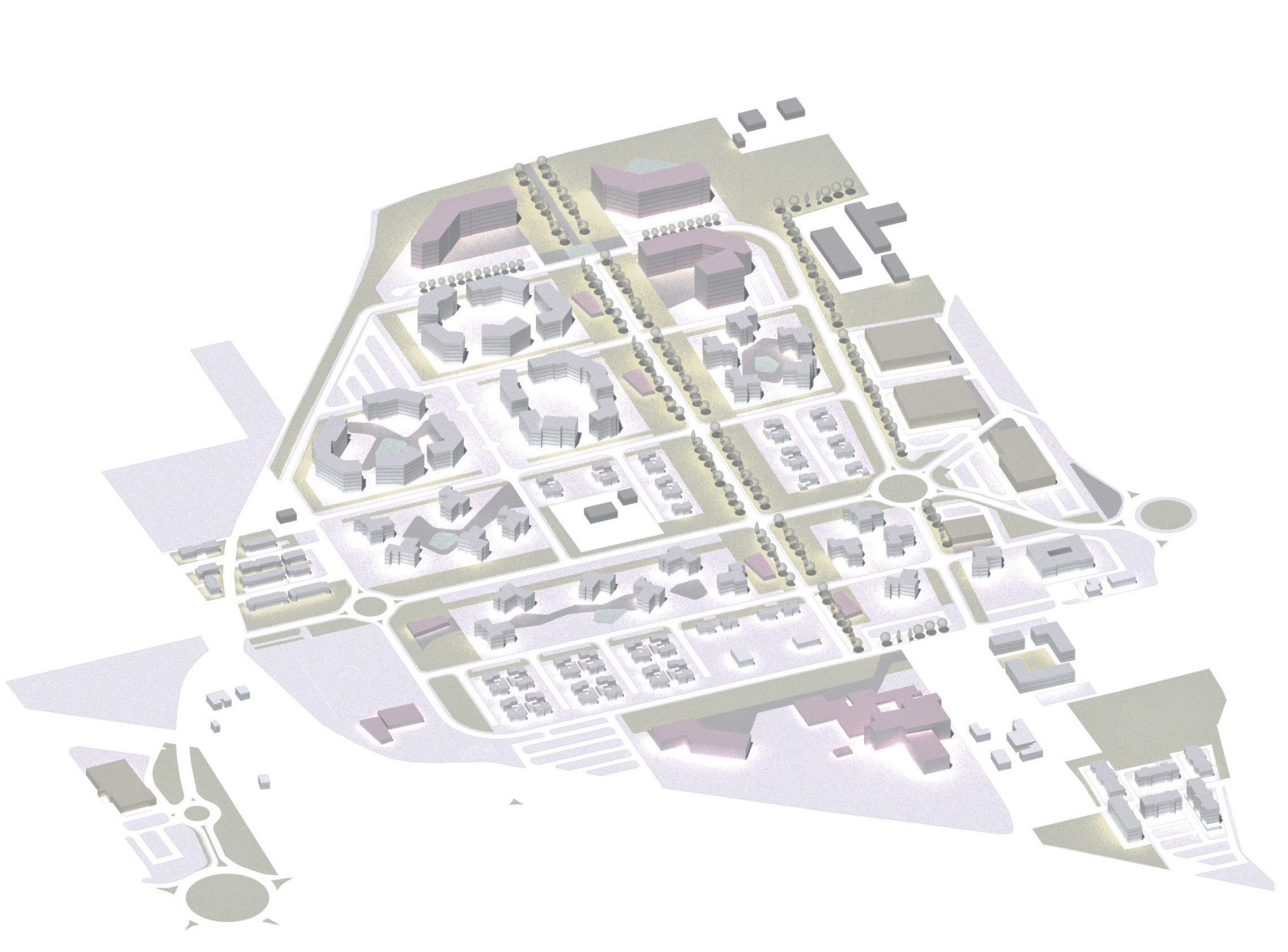